My High school rock band "Riot" performing in 1972. Here I am showing the audience an early version of "Lord Of The Dance".

Preparing for an evening of rock and roll. Let's see...guitar..check, long hair..check, beard..check, looks like I'm ready...all I needed was somewhere to go.

Here I am in 1976 singing in the hard rock band "Toast". Bill Ali on lead guitar, Bill Heningman on drums and Bobby Carnahan on bass. I learned with these guys that a good rock band always has their front-men keep their right arms up in the air.

Here I am in 1977 in the band Estamira. John Steinmetz on Lead guitar. George Harris on drums. Me on guitar/lead vocals. Ed Manning on bass. We were told we reminded people of The Beatles. Not that we looked or sounded like them, we just reminded people how much they prefer the Beatles.

My first appearance in TV Guide. I was trying to promote my new TV pilot "Young Elvis P.I.", but the show never got picked up. It was replaced by" Barnaby Jones Teen Dance Party".

Another Arts Fest. I think around 1979. Here I am announcing to the crowd that instead of singing I am going to perform 2 hours of interpretive dance.

By 1979 the many performances I did had effected me mentally to the point where I know longer remembered how to button my shirt.

In concert 1979. You'll notice that as I sing and dance the band can't stand to look at me.

I would explain to everyone I wasn't an Elvis impersonator. I was like an actor playing a part in a musical. It was just part of of a show. Honest..I mean it. For some reason no one believed me.

I never dated my photos so I have to guess when and where these are taken. This is a Pittsburgh Arts Festival Show. I think around 1980. My brothers Jim on keyboard and Frank on guitar. Eddie Doyle on drums and Tom Huchel on bass. You can tell it's my band..I don't have to wear a vest.

Here we are putting everything we have into our hit song "Ina-Gadda-Da-Veeda Polka".

I still have that guitar. I don't have the hair.

Before a country show in Addison NY in the early 80s. We always got in character for a show. From left to right: My brother Jim as a Mississippi gambler, Frank as the cowboy, me as that dude who would get beat up when he rode into town.

Often when we performed they would put up a fence like you would see around animals in a zoo. We later found out it was for our protection from country music lovers.

1987 I played bass guitar for the country rock and roll group "Gashouse". Steve Derose on lead guitar, Shirley Dragovich vocals and rhythm guitar, George Harris on drums. Steve is an excellent guitarist. So good in fact that he would not play while I was playing bass guitar.

2007 Toast had a big event at a local club celebrating 35 years as a band. (With various lead singers) I was invited back to sing a few songs that we recorded way back in 1975. They looked about the same. I on the other hand was getting AARP discounts at the bar without even asking. 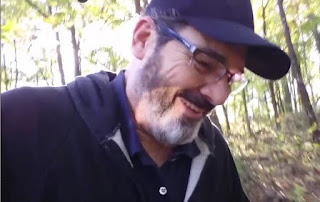 Now I spend my time wandering through the forest singing to animals.
Occasionally I sing on the internet.
Which to some people is the same thing.

A Great Source For Catholic Books

The Light Of The World